Travel off main tourist routes on this 16 day tour to places of outstanding natural beauty that were used by Academy Award winning movie director Peter Jackson in the making of ‘The Lord of the Rings’ trilogy and more recently ‘The Hobbit: An Unexpected Journey’. The visit to Hobbiton is sure to be a tour highlight – don’t miss enjoying a traditional ale, cider or non alcoholic ginger beer in the Green Dragon Inn. This tour is a must do for all Lord of the Rings and Hobbit fans! 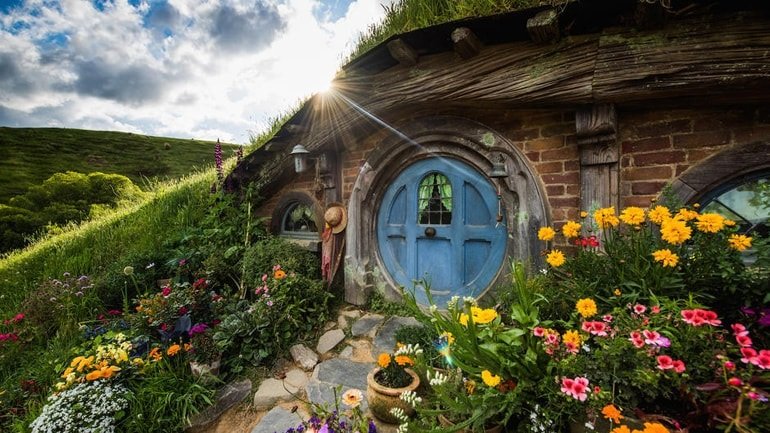 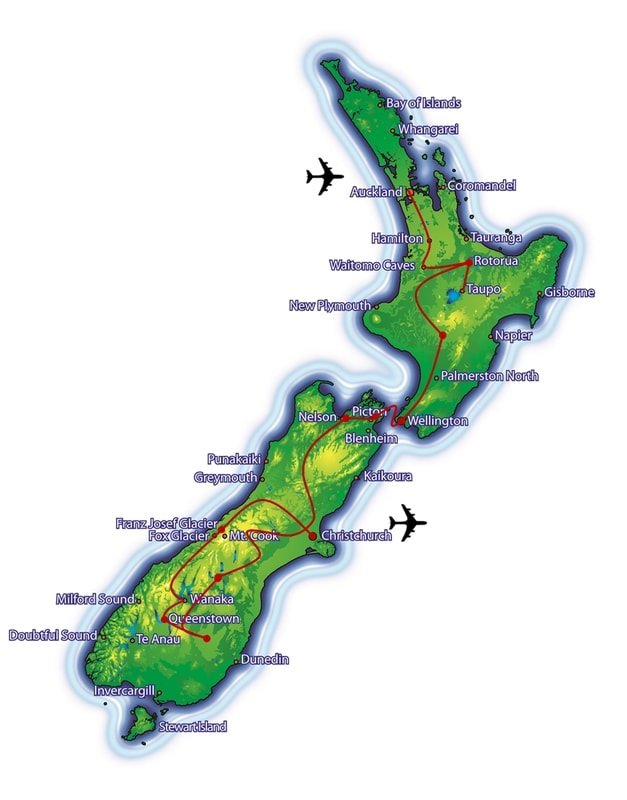 16 Day Middle Earth: The Hobbit & The Lord of the Rings Itinerary

Day 1  – Arrive Auckland Welcome to New Zealand! You will be met on arrival at Auckland International Airport before being transferred to your hotel. Tonight, a welcome dinner is served at the hotel.

Day 2 – Auckland / Waitomo Caves / Hobbiton / Rotorua Depart Auckland and travel south crossing the Bombay Hills through the dairy-rich Waikato countryside to the famous Waitomo Caves for a guided tour through the amazing limestone caves and a boat ride into the magical Glowworm Grotto – lit by millions of glow-worms. From Waitomo travel to Matamata to experience the real Middle-Earth with a visit to the Hobbiton Movie Set, the bucolic setting for The Shire. In 1999 New Zealand film-maker, Peter Jackson, transformed the green pastures of this Waikato sheep farm into The Shire, Middle-Earth, where Hobbits lived in peace in their Hobbit holes. During your guided tour, your guide will escort you through the ten-acre site recounting fascinating details of how the Hobbiton set was created. Hear stories from filming as you view the Hobbit holes, Green Dragon Inn, Mill and other structures. The tour includes a walk up Bagshot Row to Bag End, to stand outside the most famous Hobbit hole in Middle-Earth. Following your tour, dinner is served at the ‘Green Dragon’ pub. The Green Dragon featured in The Lord of the Rings film trilogy as the local meeting place for all the residents of Hobbiton. The inn also makes an appearance in The Hobbit: An Unexpected Journey. (** Note – for dinner to be included at Hobbiton, must visit on a Tuesday, Wednesday or Sunday). Following dinner drive onto the thermal wonderland of Rotorua.

Day 3 – Rotorua / Taupo / Rotorua Travel south to Taupo to the Aratiatia Rapids where cast and crew spent one week shooting the flood scene that features in ‘The Two Towers’. See Huka Falls and marvel as the mighty Waikato River thunders through the narrow canyon. Stop in the resort town of Taupo then retrace your journey back to Rotorua stopping en-route at Waiotapu Thermal Wonderland, one of the world’s most colourful thermal areas. See the Artist’s Palette where different minerals form areas on the pool surface, see the tiny bubbles surfacing in the Champagne Pool and walk down alongside the silica terrace to see the Bridal Veil Falls. Tonight visit Tamaki Maori Village for a Cultural Experience & Hangi Dinner. Experience the warmth of the Maori people during an evening of ceremonial rituals, powerful cultural performance & hangi feasting.

Day 4 – Rotorua / Piopio / Ohakune This morning head south to the settlement of PioPio (pronounced Pew Pew) home to the ‘Trollshaw Forest’ filming location in the movie ‘The Hobbit: An Unexpected Journey’. From here continue to Taumarunui then south to the Tongariro Volcanic Plateau. Here travel up Mount Ruapehu to the ‘Top of the Bruce’ then walk to Pinnacle Ridge where scenes of Mordor, Gorgoroth Plains, and the Emyn Muil were filmed before skirting the edges of Mount Ruapehu to Ohakune.

Day 5 – Ohakune / Wellington This morning visit the Mangawhero Falls and the river bed where Smeagol chased and caught a fish, before heading south again across the Central Plateau and through the Manawatu Gorge to arrive at the garden of Fernside, the location of Lothlorién in Featherston. Continue south again before arriving into New Zealand’s capital city Wellington, which was home to many of the LOTR actors and crew during production.

Day 6 – Wellington In central Wellington visit the summit of Mt Victoria (Outer Shire) and see the Embassy Theatre – home to the Australasian premieres of ‘The Fellowship of the Ring’ and ‘The Two Towers’ and the world premiere of ‘The Return of the King’. Head out to the Hutt Valley to Harcourt Park which became the Gardens of Isengard, nearby Hutt River where a portion was used to film River Anduin then head to the Kaitoke Regional Park which was used for filming Rivendell in 2000. Visit the Weta Cave where a short movie provides a behind-the-scenes look at Weta and includes interviews with Weta co-founders Peter Jackson & Richard Taylor to give insight into the creativity of Weta. In the mini-museum, come face to face with some of the characters, props and displays from your favourite movies. Time permitting, visit Te Papa – New Zealand’s National Museum to learn about the shaping of its land, the spirit of its diverse peoples, its landscapes & distinctive popular culture.

Day 7 – Wellington / Pelorus Bridge / Nelson Today commences with a cruise on board the Interislander Ferry across Wellington Harbour and Cook Strait then through New Zealand’s only true sounds, the picturesque Marlborough Sounds into Picton. Board your coach and drive through to Pelorus Bridge for a walk through the Beech and Podocarp Forest as well as viewing the many sculptured boulders in the Pelorus River. Upon arriving into Nelson there will be time to visit the original jeweller of the Ring; Jens Hansen Jewellers or take an optional helicopter flight to Mount Owen. As you fly toward Mt Owen, a landscape of glaciated marble karst is exposed and you appreciate the size of these giant rocks. This was the eastern exit from the mines of Moria from The Lord of the Rings.

Day 8 – Nelson / Methven Travel south through Brightwater, the of Lord Rutherford, the New Zealand science pioneer who split the atom, then on through the Golden Downs Forest, to Murchison through the Maruia Forest over the Lewis Pass then into Hanmer Springs.  Time out here for lunch in this lovely alpine village (at own expense) before joining the upper reaches of the Canterbury Plains to your accommodation at the foot of the Southern Alps mountain range.

Day 9 – Methven / Mt Sunday / Twizel Head back into the Southern Alps mountain range to Mt Potts Station where conditions permitting, take a walk to Mt Sunday better known as Meduseld in Rohan in the Lord of the Rings. Travel back down to the Canterbury Plains before crossing Burkes Pass and arriving in Tekapo. See the magnificent blue waters of Lake Tekapo and visit the Church of the Good Shepherd and the statue of the Collie dog then visit Braemar Station, a location from The Hobbit: An Unexpected Journey.

Day 10 – Twizel / Poolburn / Cromwell This morning visit Ben Ohau Station which featured in the Battle of the Pelennor Fields and then visit the Poolburn Reservoir where the surrounding area was used to portray Rohan. Afterwards travel onto Tarras where scenes were filmed for the Great East Road, Flight to the Ford and the Misty Mountains. Your accommodation tonight is in Cromwell located on the shores of Lake Dunstan.

Day 11 – Cromwell/ Arrowtown / Glenorchy / Queenstown From Cromwell follow the rugged Kawarau Gorge Road and head into the historic gold mining township of Arrowtown, where the Ford of Bruinen was filmed. From here skirt the shores of Lake Wakatipu and head to Glenorchy with its backdrop of the Misty Mountains located at the head of Lake Wakatipu. The area was also used as a location in The Lion, The Witch and The Wardrobe. Return to Queenstown via the Twelve Mile Delta where filming of Ithilien took place. Tonight is free for you to explore the local restaurants, cafés and bars.

Day 12 – Queenstown Today is a day at leisure where you have the option to visit the numerous movie set locations in the area with independent tour operators. Recommended options include the Paradise Safari Mavora Lakes – Scenic Lord of the Rings Day Tour featuring Fangorn Forest, Amon Hen, Nen Hithoel (Sindarin ‘Lake of Many ‘), and the River Anduin. Also recommended are the Lord of the Rings & Glacier Explorer – Heli Flight or a half-day 4WD excursion with Nomad Safaris to discover backroad filming locations in the Wakatipu Basin.

Day 13 Queenstown/Wanaka Today leave Queenstown and head across distinctive Central Otago landscapes to Wanaka. Here drive to Glendhu Bay near Wanaka to see the backdrop for Gandalf’s flight to Rohan. This pretty resort town set on the shores of Lake Wanaka is a popular vacation spot with New Zealander’s. On a clear there are splendid views across the lake to Mt Aspiring.

Day 14 – Wanaka / Franz Josef Today sit back and enjoy a day of lake and alpine scenery, rainforest and spectacular coastal views. Ascend past glacial Lakes Wanaka and Hawea and cross the Southern Alps via the Haast Pass – the lowest of the mountain passes through the Southern Alps. Once over the Pass the scenery changes dramatically as you make your way to Haast. The journey north along the West Coast features native rainforest, wetlands, bush-fringed lakes, sand dunes and surf-pounded shingle beaches. Drive through the Fox township stopping en-route at the viewpoint to see the Fox Glacier set amidst native rainforest then continue north to Franz Josef village. The massive rivers of glacial ice of the Fox Glacier and Franz Josef Glacier flow from snowfields high in the Southern Alps almost to sea level – quite an unusual feature in a temperate climatic zone.

Day 15 – Franz Josef / Christchurch Drive north along the West Coast with the Tasman Sea to the west and the Southern Alps rising steeply to the east to the town of Hokitika. Time permitting, visit a greenstone factory at Hokitika where a local jade-like stone highly prized by pre-European Maori is crafted into exquisite jewellery. Head inland to the small remote village of Arthurs Pass in the heart of Arthurs Pass National Park. Here board the Tranz Alpine train for a scenic rail journey through the heart of the mighty Southern Alps. Travel across towering viaducts, through spectacular gorges and river valleys then the landscapes opens up as you journey across the fertile Canterbury Plains and into Christchurch City.

Day 16 – Depart Christchurch Morning sightseeing tour of Christchurch including Hagley Park, the Christchurch Botanic Gardens and the River Avon. Learn about the effects of the 2011 earthquakes and how the city is rebuilding.  Tour concludes at Christchurch International Airport with check in for your departure flight.

This website uses cookies to improve your experience while you navigate through the website. Out of these, the cookies that are categorized as necessary are stored on your browser as they are essential for the working of basic functionalities of the website. We also use third-party cookies that help us analyze and understand how you use this website. These cookies will be stored in your browser only with your consent. You also have the option to opt-out of these cookies. But opting out of some of these cookies may affect your browsing experience.
Necessary Always Enabled
Necessary cookies are absolutely essential for the website to function properly. This category only includes cookies that ensures basic functionalities and security features of the website. These cookies do not store any personal information.
Non-necessary
Any cookies that may not be particularly necessary for the website to function and is used specifically to collect user personal data via analytics, ads, other embedded contents are termed as non-necessary cookies. It is mandatory to procure user consent prior to running these cookies on your website.
SAVE & ACCEPT